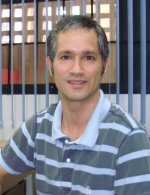 Prof. Araujo received his B.S. (1992) and M.S. (1994) degrees in Physics from the Universidade Federal de Pernambuco (UFPE), Brazil.  In 2000, he obtained his Ph.D degree from The Institute of Optics at the University of Rochester, where he worked in the field of quantum control of wave packets and laser cooling and trapping of neutral atoms.  In 2001, as a guest researcher, he joined Bill Phillips’ “Laser Cooling and Trapping Group” at the National Institute of Standards and Technology (NIST) at Gaithersburg, MD.  At NIST, he worked on the photoassociation spectroscopy of laser cooled Na atoms.  He returned to Brazil in 2003 as a visiting professor at UFPE.  In 2004, he joined the faculty of the Instituto de Física “Gleb Wataghin”. Current interests include optical imaging cloning in atomic vapors and the Goos-Hänchen effect.