The purpose of this guide is to assist the student to become familiar with the procedures with radioactive sources. To achieve our goal, however, it is necessary to read and study the entire contents of that matter in the textbooks listed at the beginning of the semester (Melissinos and Preston). Photoelectric effect: The handling of radioactive sources, the work of characterizing them from an appropriate detector, quantifying the events of issue in accordance with the associated energy and thus identify some of the processes of interaction of radiation with matter, namely , Compton scattering and pair production. From the spectrum of gamma rays from each radioactive source, ie, from the identification of the curves of the number of events per energy with their characteristic peaks, one must know how to associate each energy range where there are three main interactions of gamma rays with matter and distinguish incidental or systematic errors in the equipment management. To subsidize the experiment, however, it is worth understanding what it means to the emission of gamma rays.

Some nuclei are unstable in their composition and nuclide can decay into more stable configurations. And this is done by emission of particles very energéticas.Os atomic nuclei have discrete energy levels, similar to the levels of the atomic orbitals. The transition between energy states of the same nucleus is accompanied by the emission of a quantum of electromagnetic radiation (photons). However the nuclear force is much more intense and the distances involved are much smaller (on the order of 10-15 m). Consequently, the photon energy is too large. The photons emitted by the atomic nucleus are called gamma rays (g). We classify these nuclear reactions as follows:

There release of a core of He 2α4, which is very ionizing whose scale factor in the relative potency of penetration (PRP) is 1. Occurs in nuclei of elements whose atomic numbers are z>  83. Example:

In this case we 1β0, where a release of an electron with great speed, which factor is PRP 100, penetrating the body tissue about 1 cm. Usually occurs on elements that have a much larger number of neutrons than protons.

Positron emission. The factor is PRP and 100 occurs in situations where the core has a larger amount of neutrons to protons compared. 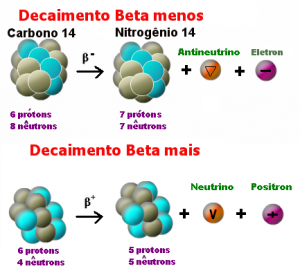