I first met Michel in Sao Paulo, Brazil, in 1985, 29 years ago. His ideas on chaos and periodic trajectories inspired my PhD research and led me to the US for a postdoc at the MIT from 1987 to 1989. Among so many things, Michel taught me path integrals, which he had learned directly from Feynman, and which I later taught my own students. He taught me to think deep about things, to look for new solutions, in different directions. The postdoc ended with a beautiful cross-country trip from Boston to Santa Barbara, CA, just Michel, my wife Denise and me, in his Subaru. Michel was so systematic that it took us hours just to pack the car: every suitcase and bag had to be put in the best possible position to maximize space. And it did in the end! The trunk was so perfectly packed that it looked like a Lego toy. That was Michel. Everything had to be as perfect as possible and he would work ha 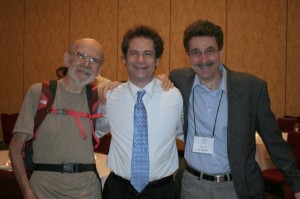 rd to make it happen. The paper we started in 1989 took 12 years to get finished and published, but is one of my main contributions in Physics. Our best years together, however, were spent in Boston, at NECSI, working with Yaneer and Hiroki. Michel was already retired from MIT, living in Tucson. We would both go to Boston and camp at the old NECSI house, near Harvard Square. Yaneer would send everybody home at 6pm and the house would become our home until 8am of the next day. Michel would sleep in the couch and I on a mattress on the floor, listening to the low humming of the computers. We used to chat for hours, about Physics, Biology and so many things. Those were glorious days. Our work in Evolution started there. As the years passed, Michel grew older and his health declined. His mind, however, remained sharp. His memory, incredible. From 2001 to 2009 we met several times at NECSI and in Brazil, where he used to visit me in May. Now this is all over and I will miss every bit of it. The last time I saw him was in December 2013, when I visited him for a week in Tucson. We said goodbye in front of his house, where I took a taxi cab to the airport. We hugged for a long time and he had tears in his eyes. I think he knew that would be the last time we would see each other. I had no idea.