Combining a moderate precooling to about 20 K through a helium cold finger cryogenic system, and, more importantly, backaction laser cooling, researchers [1] were able to drive and probe an optomechanical oscillator to the quantum “ground state”, its lowest possible energy level. Achieving this level on a macroscopic device has been of interest in Quantum Physics for almost a decade. As for atoms, molecules and ions, reaching the ground state is the first step towards studies of quantum effects, but now at macroscopic levels, where billions of atoms represent a single quantum state. 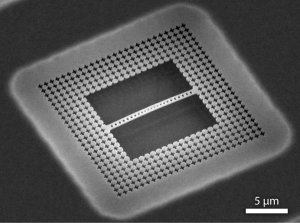 Figure 1. SEM of the silicon nanobeam device used in this experiment. The periodicity of the holes in beam in the center allows for strong confinement of photons and phonons. The cross shaped holes surrounding the beam have phononic bandgap at 4 GHz (the mechanical frequency of our oscillators), further confining the mechanical energy of our structures.

The silicon nanobeams in this work are a culmination of several years of optomechanical crystal design by Oskar Painter’s group. Fabricated from a silicon-on-insulator (SOI) wafer consisting of 220 nm silicon sitting on top of a 2 µm SiO2, these devices exhibit a high degree of optical and mechanical co-localization. This strong, simultaneous confinement of phonons and photons causes them to interact extremely strongly and in essence, allowed us to use our cooling laser beam (phonons) to “pull” the mechanical energy (phonons) out of the system, cooling it to the ground state. This system has the advantage of working in the communication band for optics (1550 nm), where advances in telecom technology translates into well developed laser, amplifier and detection system, and in the high frequency range (gigahertz) for mechanics, where many of the noise sources plaguing similar experiments are highly suppressed, as well as raising the temperature where ground state is achieved (~200 mK as opposed to micro-Kelvin temperatures in megahertz systems).

Figure 2. From left to right. SEM image of the measured sample. FEM simulated image of the cavity region of our structures with red and blue indicate the optical mode and on the right exaggerated deformation to show the mechanical mode. The highly confinement and overlap of optical and mechanical mode accounts for high optomechanical coupling.

Unlike a classical oscillator, a quantum oscillator has a lowest energy state with a finite amplitude uncertainty corresponding to its zero-point motion. If a guitar string were a quantum oscillator it would emit a continuous note even while at “rest”. This is just one of many examples of the counter intuitive behavior within the quantum world. In our everyday life experience mechanical oscillators are filled with many energy quanta due to interactions with their highly fluctuating thermal environment, and the oscillator’s quantum nature is all but hidden.

Two distinct ways to separate and isolate a mechanical oscillator from the highly fluctuating thermal environment and consequently cool it down to the ground state had been proposed and used. The first was done by Santa Barbara researchers [1] which lowered the environment temperature (Tb ~ 25 mK) up to the point where only a fraction of a quanta was present in a high frequency mesoscopic mechanical resonator. The second way involves back-action cooling, an active way to extract thermal vibration through an optical channel, which is the topic of this work.

It has been known for some time [3] that atoms and ions nearly resonant with an applied laser beam (or series of beams) may be mechanically manipulated, even trapped and cooled down to the quantum ground state of their center-of-mass motion [4]. Equally well known has been the fact that radiation pressure can be exerted on regular dielectric (i.e., non-resonant) objects to damp and cool their mechanical motion[5]. This is the result of the force impinged by the light field, the “radiation pressure force”, used not only in optical tweezers but also as a propulsion system on satellites [6].

In the so-called cavity-assisted schemes, the radiation pressure force is enhanced by coupling the motion of a mechanical object to the light field in an optical cavity. An analogy to this is the acoustic guitar: the sound box (a resonant cavity) couples to the mechanical vibrations from the guitar string, amplifying and reshaping them into sound waves.

As mentioned above, the optomechanical system studied in this work enables large optical coupling to a high-quality factor GHz-frequency mechanical oscillator, allowing for both efficient back-action cooling and significantly higher operating temperatures. We then use the radiation pressure from a laser to cool the mechanical motion down to the quantum ground state (average phonon occupancy of 0.85 ±0.08).

These experiments, in addition to providing a glimpse into the underlying quantum behavior of mesoscopic systems consisting of billions of atoms, represent the initial steps towards the use of mechanical elements as tools for quantum metrology [7,8] or as a means to couple hybrid quantum systems [9, 10, 11]. For example, optomechanical entanglement between light and mechanics or quantum state transfer between single optical photons and mechanical phonons may be envisioned, enabling mechanical systems to function as either quantum transducers or quantum memory elements.