Scheme for a 2D-Fourier Transform Spectroscopy. This system is under construction in our group and it is based on the Univ. of Michigan setup.

Colloidal nanomaterials present a finite size distribution which broadens the absorption and emission spectra, hiding underneath it a rich set of information concerning their electronic dynamics. Here we apply a coherent spectroscopy method to eliminate the inhomogeneous broadening and access those hidden processes, without loosing temporal resolution.

This method consists in an advanced four-wave mixing technique, in which all four delays can be moved. Via a heterodyne detection, where the four-wave mixing is interfered in a spectrometer with one of the four excitation beams, it is possible to monitor not only the four wave mixing intensity but also its phase, been able to obtain information concerning the electronic dephasing time. 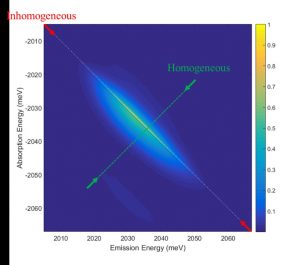 2D-FTS Spectrum for CdSe/CdZnS QDs showing the much narrower homogeneous broadening. Figure is courtesy from Dr. Diogo B. Almeida from Univ. of Michigan.

Currently, this system is been set up in our laboratory. Consequently, these studies are done, so far, in collaboration with Prof. Steven Cundiff´s group at the University of Michigan.

In short, three out of the four pulses in a box geometry (the fourth beam is used for the heterodyne detection) are used to excite the sample and create a transient four-wave mixing signal which can be investigated as a function of the delays between the excitation pulses. Near the band edge, it is possible to approximate the nanocrystals by a group of resonant two level system, with the main broadening is given by size inhomegeneity. The transient four wave mixing generated by each resonance can be detected separately, allowing the high spectral resolution.

What is new at USL