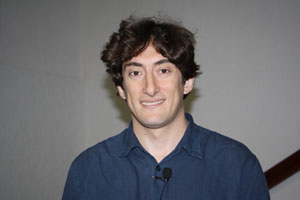 Received his B.S. in Physics from Universidade Estadual de Campinas, Brazil, in 2003, and his Ph.D. degree in Physics from the same university in 2008. He was a postdoctoral scholar in the Department of Applied Physics at Caltech, USA, from 2008 to 2011. In 2011, he joined the faculty of Applied Physics Department at Universidade Estadual de Campinas as an Assistant Professor and Associated Professor in 2019. He is member of Brazilian Physics Society, American Physical Society, Brazilian Photonics Society and Affiliate Member of The Brazilian Academy of Sciences (ABC). His expertise are in the applied physics areas related to micro- and nano-optical cavities, optomechanical interactions and nanostructured systems.